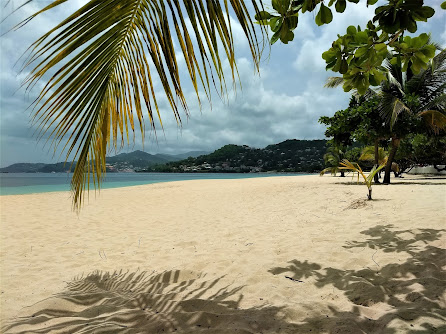 Wednesday 23rd June, Quarantine, Room 548, Hyatt Regency Perth, Australia.  Well here I am in hotel quarantine again. I’ll start with a quick summary to clear up any confusion. We finally managed to tear ourselves away from St. Maarten and sailed back to Grenada. I’ll be working in Hobart (Tasmania, Australia) for three months but there are no international flights into Tassie so I flew to Perth. Good old Fortress Australia is still insisting on the full 14 day hotel quarantine for everyone (except Prime Ministers) as soon as you touch Australian soil so I’m doing my quarantine here in Perth before flying on to Hobart. Karl has been left behind again in Grenada. That’s it, you’re up to date. So. We set several dates for leaving SXM but the weather kept getting in the way so we didn’t end up leaving until the end of May. Bright side - Karl got to celebrate his birthday with yet another trip to the end of the runway and a visit to his two favourite beach bars (for the record - Driftwoo
1 comment
Read more

15 th to 17 th May, Saba, Dutch Caribbean. We only spent a weekend on Saba but it's such a special place that I decided it deserved a blog entry all to itself. It's a little thirteen square kilometre speck of a volcanic peak, a part of The Netherlands, with a population of 1500 (plus 500 students at the local medical school – because a Caribbean island isn't a Caribbean island without a medical school). Allegedly it was the inspiration for Skull Island in the original King Kong film. It's quite the fortress to approach from the sea and I assume attracted a particularly hardy breed of settlers who favoured isolation. Settlers were English, Irish, Dutch and Scandinavian along with their slaves and fishing and piracy were apparently the ways of making a living. I fell in love with Saba before I arrived when I looked at a map. The two settlements on the island are The Bottom (the capital) and Windwardside. The airport is at Flat Point. There's a hiking trail called
1 comment
Read more

View of the lagoon from a high hill. The left half is the Dutch Side, the right half is the French Side. Tuesday 11 th  May, Simpson Bay, Sint Maarten. Yup. Still here. Same spot. Our anchor chain has worn away a pizza-shaped patch of seagrass. We do actually have a plan to leave now though, probably late next week. Why are we still here, you ask, instead of off exploring the dozens of other Caribbean islands? A few reasons. Sint Maarten is awesome (see previous entry). We got ridiculously lucky and got our Covid vaccines so staying around an extra three weeks for the second dose was absolutely happening. Lots of islands are closed or have long quarantines. We were going to go to St. Vincent next but then their volcano started erupting. So we have accepted that The Universe has spoken and decided to just stay put until it's time to head back to Grenada for hurricane season. The superyachts have already all gone to North America or the Med leaving spookily deserted docks all aro
2 comments
Read more
More posts